Who are the best goal scorers in the Summer Olympic Games' history?

In a world where football is seemingly dominated by FIFA and its associate organizations, it is sometimes all too easy to forget that the Summer Olympic Games hosts its very own football tournament. Many top footballers of the world are barred from competing in this unique football competition. On the basis of their age and, in some cases, whether they have competed in a world cup event. The competition itself often produces world class football and with it some of the best goal scoring performances ever recorded. Read on to discover the top ten goal scorers in Olympic Football history.

A player from humble beginnings, Romario was first talent-potted as a child while playing for a local club in the shanty towns of Rio de Janeiro, Brazil. He was signed to the junior team of Vasca de Gama where he won two state league titles, and earn himself a call up to the national Brazilian team. His professional football career skyrocketed for his performance at the 1988 Seoul Olympic Games when he scored 7 goals for Brazil, making him the top goal scorer for the entire tournament.

Andrzej Juskowiak was a mainstay in the Polish national team for much of the 1990s and early 2000s, a tenure in which he maintained a personal record of scoring 13 goals in 39 matches. 7 of his 13 goals was scored at the 1992 Olympic Games in Barcelona, making him the top goal scorer for the entire tournament. Despite his goal scoring efforts however, Juskowiak would have to settle for Poland winning the silver medal after a close 3-2 defeat to Spain in the gold medal match.

Carlos Tevez remains one of the most famous footballers of the early 21st century having played for some of the biggest football clubs in footballing history, such as Juventus F.C, Manchester United and Manchester City. However little emphasis is placed on his Olympic performance during the 2004 Olympic Games in Athens, in which he scored 8 goals for Argentina, became the top goal scorer for the tournament and crucially helped Argentina to clinch the coveted gold medal in the Olympic final against a lacklustre Paraguay.

Known as 'Guld-Harald' (Gold-Harald), Harald Nielson enjoyed a relatively short stint playing for his national team Denmark between 1959 and 1960. During this period, he played 14 matches and scored an impressive 15 goals, 8 of which were netted during the 1960 Olympic Games in Rome. Due to his goal scoring prowess, Nielson would make headlines as an international striker by becoming the top goal scorer for the entire 1960 Olympic tournament. However despite his efforts, Nielson would have to settle for the silver medal as his team were routinely beaten 3-1 in the Olympic Final by a strong Yugoslavian team.

Pedro Petrone was often referred to as 'Artillero' or 'the gunner' because of his marksman-like accuracy when scoring goals. He was also a key player in both the 1924 and 1928 Olympic Uruguayan National Team, helping his country to the Olympic Gold Medal on both occasions. He is perhaps best known for scoring 8 goals in the 1924 Olympic Games, which qualified him as the top goal scorer for the entire tournament.

Kazimierz Deyna helped Poland to the gold medal at the 1972 Olympic Games in Munich, where he was also named as top goal scorer for the entire tournament. He would also feature in the 1976 Polish Olympic Team where he would play an important part in helping his team to the silver medal following a disappointing 3-1 defeat to East Germany.

Between 1922 and 1929, Tarasconi played a total of 24 matches for Argentina, scoring 18 goals. 9 of his 18 goals was scored at the 1928 Olympic Games in Amsterdam. As a result of his incredible Olympic performance, Tarasconi became top goal scorer for the entire tournament. Unfortunately Argentina medalled in silver position at the 1928 Olympic Games following a 2-1 defeat to neighbours Uruguay.

Gottfried Fuchs is perhaps best remembered for tying the record set by Sophus Nielson at the 1908 Olympic Games for scoring 10 goals in a single international match during a 16-0 victory against Russia in a Consolation Tournament at the 1912 Olympic Games in Stockholm. For his efforts in just one match, Fuchs became the top goal scorer for the 1912 Olympic Games. Fuchs' shared record with Nielson of scoring 10 goals in one international match remained unbroken until 2001 when Archibald Thompson scored 13 goals for Australia in a 31-0 win over American Somoa.

Sophus Nielson is perhaps best known for setting the then unprecedented record of scoring 10 goals in a single international football match during a 17-1 win over France at the 1908 Olympic Games in London.

While he was the top goal scorer for the 1908 Olympic Games with 11 goals, Denmark would have to settle for the silver medal position after a rather disappointing 2-0 defeat to host nation Great Britain.

Ferenc Bene is a little known footballer who is statistically the best goal scorer in a single Olympic event with 12 goals scored in 5 matches at the 1964 Olympic Games in Tokyo, Japan. He would become the top goal scorer in that tournament and would play a crucial part in helping Hungary to the gold medal following a 2-1 victory over neighbours Czechoslovakia.

What is CAF Champions League?

What is UEFA Europa League?

What is Football World Cup?

What is UEFA European Championship?

the soccer Euro Championship explained for beginners, learn about the origin, format & final schedule, participation & goalscorers of the most famous soccer tournament in Europe. 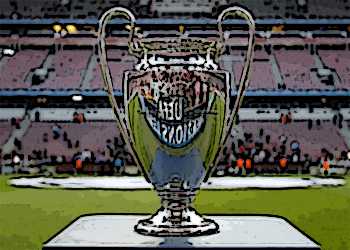 What is UEFA Champions League?

what is the UEFA Champions League? All information & explanation needed about the soccer European Cup, history, participants, scope & statistics.